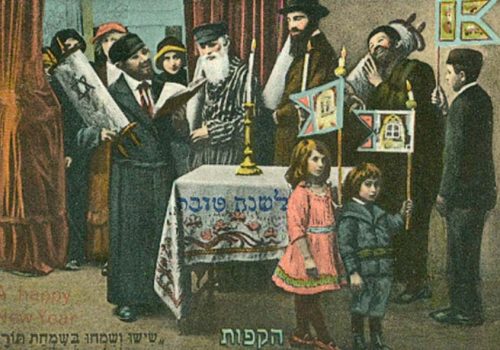 Rosh Hashanah is the Jewish New Year, and it’s a time for introspection, reflection, and family. If you’re not familiar with the holiday, or if you’re interested in celebrating it but don’t know where to start, this beginner’s guide is for you!

Rosh Hashanah is the Jewish New Year, and it occurs on the first day of Tishrei, which is the seventh month of the Jewish calendar. The holiday lasts for two days, and it’s a time for family gatherings, special meals, and prayer.

Rosh Hashanah is a relatively new holiday; it’s first mentioned in the Talmud, which was written around 1600 years ago. But its roots go back even further. The Talmud tells us that Rosh Hashanah was originally a agricultural festival, marking the beginning of the harvest season.

Over time, Rosh Hashanah became more associated with the idea of a new year. This is likely because Tishrei is the first month of the lunar Jewish calendar, and the beginning of a new year is traditionally a time for introspection and reflection.

There are many customs and traditions associated with Rosh Hashanah. One of the most important is Tashlikh, which is a ceremony in which people cast their sins into a body of water. This symbolizes letting go of the past and starting fresh for the new year.

Another tradition is eating special foods like apples dipped in honey, which signify a sweet new year, or round challah bread, which symbolizes the cyclical nature of time.

Finally, spending time with family is an important part of Rosh Hashanah. Many people use the holiday as an opportunity to reconnect with relatives they haven’t seen in a while.

How is Rosh Hashanah celebrated today?

Rosh Hashanah is still a time for family, food, and reflection. But it’s also a time to celebrate the Jewish people’s rich history and cultural traditions.

For many Jews, Rosh Hashanah is a time to feel proud of their heritage and to think about what it means to be Jewish in the modern world. It’s also an opportunity to celebrate the strength and resilience of the Jewish people, who have faced centuries of persecution but have always managed to rebuild and thrive.

No matter how you choose to celebrate Rosh Hashanah, we hope you have a happy and healthy new year!

How to greet people during Rosh Hashanah?

One of the most important parts of celebrating Rosh Hashanah is greeting people with the traditional phrase “L’shanah tovah,” which means “Have a good year.” You can also wish people a “Shanah Tovah u’metukah,” which means “A good and sweet year.”

If you’re not sure how to pronounce these phrases, don’t worry – just say them slowly and people will understand what you’re trying to say.

What are some other common Rosh Hashanah greetings?

Here are some other common Rosh Hashanah greetings:

“May you be inscribed in the Book of Life!” (in Hebrew: Ken y’hi ratzon!)

“Have a happy and healthy new year!” (in Hebrew: Shanah tovah u’metukah!)

What are some common Rosh Hashanah foods?

There are many traditional Rosh Hashanah foods, but some of the most popular are apples dipped in honey, round challah bread, and roasted meats. These foods symbolize a sweet new year, the cyclical nature of time, and the hope for a prosperous future.

Apples and honey are so closely associated with Rosh Hashanah that they even have their own blessing: ” Blessed are You, Lord our God, King of the Universe, who creates the fruit of the tree.”

How is Rosh Hashanah different from other New Year’s celebrations?

Rosh Hashanah is different from other New Year’s celebrations because it is based on the lunar Jewish calendar. This means that the date of Rosh Hashanah changes every year, and it doesn’t always fall on January 1st.

Another difference is that Rosh Hashanah is a two-day holiday, while most other New Year’s celebrations only last for one day.

Finally, Rosh Hashanah is a religious holiday, while most other New Year’s celebrations are secular.

What is the story of Rosh Hashanah?

The story of Rosh Hashanah begins in the book of Leviticus, which is part of the Hebrew Bible. In Leviticus 23:23-25, God tells Moses that the first day of the seventh month is to be a holy day, and that on this day the people are to rest and make offerings to Him.

This day is known as Rosh Hashanah, or the Jewish New Year.

Over time, the traditions associated with Rosh Hashanah have evolved. But the holiday still retains its original purpose of being a time for introspection, reflection, and prayer.

What are some common symbols of Rosh Hashanah?

There are many common symbols of Rosh Hashanah, but some of the most important are the shofar, the lulav, and the etrog.

The shofar is a trumpet made from a ram’s horn, and it is traditionally blown during Rosh Hashanah services. The sound of the shofar is meant to awaken people from their spiritual slumber and to remind them of God’s power and majesty.

The lulav is a green palm branch that is held in one hand during Rosh Hashanah prayers. The lulav symbolizes the hope for a prosperous new year.

The etrog is a citrus fruit that is used in a similar way to the lulav. The etrog symbolizes the sweetness of life and the hope for a sweet new year.

What are some common activities during Rosh Hashanah?

There are many common activities during Rosh Hashanah, but some of the most important are attending religious services, eating special meals, and spending time with family and friends.

Religious services are an important part of Rosh Hashanah because they provide a time for introspection and reflection. They also give people a chance to pray for a good year ahead.

Special meals are another important part of Rosh Hashanah. These meals typically include traditional Jewish dishes such as brisket, matzo ball soup, and kugel.

Finally, spending time with family and friends is an important part of Rosh Hashanah because it helps to create a sense of community and togetherness.

Rosh Hashanah is a special time for reflection, family, and good food. If you’re not familiar with the holiday, this beginner’s guide will help you get started. With just a little bit of research and effort, you can easily incorporate some of the key traditions into your own celebrations. Approach the holiday with an open mind and respect for its customs, and you’re sure to have a wonderful experience!

Shanah tovah! to Everyone